After the Sheffield march and rally, our local co-ordinator, Lindy Stone, made her way to Glasgow to spend two days at COP26. Here is an account of her experience.

I travelled to Scotland after the march in Sheffield for three reasons: a) be part of something BIG - the biggest event for the climate and environment that there will ever be in UK in my lifetime. b) to meet with members of Friends of the Earth nationally to share experiences of campaigning in the UK and c) I also wanted to take opportunity to be part of wider FoE family, to meet with and listen to  citizens of global south countries about their reality. They will be first and worst affected, having contributed so little to the damage and the urgency of their situation is heartbreaking. It was this last aim which was less fully met because, of the limitations placed on travel by potential delegates. The lack of their voices was keenly felt, even though the few voices heard were very powerful.

I spent Sunday morning with FoE and the Stop Cambo alliance in actions to protest against the UK government's continued refusal to rule out various fossil fuels projects in the UK and funded by the UK abroad, with a particular focus on the Cambo oilfield west of Shetland. Development of this would be the equivalent in emissions of 18 coal fired power stations which is clearly nonsense in the government's own  terms because it would blow a hole in their 2050 target. The money that would fund this work would be much much much better used invested in renewable energy production OR in seeking out alternatives.

Click here for video of the Stop Cambo protest

In the afternoon, as part of the Friends of the Earth contingent I moved on to an FoE curated exhibition ‘Minor foundation for major challenges’ which highlighted a range of projects undertaken with just a little support by communities around the world. This ranged from Croatian villagers coming together to source and install solar panels which gave them reliable electricity for the first time,  to a seed gathering and distribution scheme in South America to ensure availability of drought resistant crops.  The simplicity of these small scale, largely self-help, schemes was both humbling and hopeful, yet at the same time, the limited access to even the relatively small sums needed to make a difference was shaming of the richer countries.

Finally on Sunday, I attended a panel event Our Time is Now multi-national panel of speakers (from Ecuador, Pacific Islands & S USA but also including Caroline Lucas MP) offering their views on the current intersection crises of climate, nature and inequality and routes out of these. Similarly multi-national audience gave fresh perspectives on the way these affect people around the world.

That event was run as part of the COP26 Coalition's People' Summit, a week long wide ranging programme of events held both in person and online which will be subsequently available to be viewed via their website. I attended a second event in the prgramme the next day one which was more  UK focused. The panel event 'Future Cities: zero carbon, nature friendly, socially just by 2030?'  had speakers from Leeds, Glasgow, Bristol and Edinburgh describing their cities' journeys on a path to decarbonisation within a fair transition. Again, the audience was multi- national with participants from Budapest, Stockholm, Istanbul, Frankfurt and Corfu to name but a few.  In small groups we also shared concerns, ideas, frustrations and plans, many f which were shared across national boundaries (skilling up the workforce to carry out retrofitting work being just one shared concern!)

Timings/trains precluded me from attending another specific event but it did give me time to wander through Glasgow centre taking in the many street-promotions  which marked out the city as determined to lead the way on action to combat the climate challenges ahead. I also passed two particularly moving poster installations; one highlighting the importance of the voice and experience of indigenous peoples and the other showing the dangers campaigners face in carrying out their mission.Some photos of this are below.

All in all, I had a fascinating two days - even though I was nowhere near the main events. The experience left me angry, energised yet also hopeful about the potential for change - because it will be forced in to being by the campaigners, thinkers and organisers who I met during my stay. 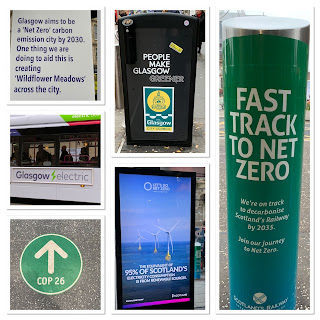