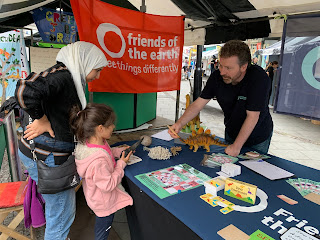 On Saturday 25th of September we joined partners in Sheffield Climate Alliance on Fargate in the city centre as a Great Big Green Week event. It was good to be surrounded by other campaign groups including Sheffield Greenpeace, Green New Deal South Yorkshire, Cycle Sheffield and Global Justice. The presence of the local 'climate lobby' in itself made a statement but passers by, while often busily going about their business (shopping!) were constantly stopping and talking.

Our focus was firmly on COP26 - and the steps that need to be taken to avoid a 6th mass extinction. We drew attention to the 5th mass extinction which 'did for' the dinosaurs - starting conversations with a replica dinosaur claw and tooth. We also had a variety of fossils and a piece of bleached coral to highlight the ongoing concerns.  Our handout was a national Friends of the Earth flier which on one side gave a snakes and ladders style game of the positive (green finance!) and negative (Cambo oil field! Funding gas exploration in Mozambique!) projects which the UK government is currently engaged in. The other side was a simple explanation of the FoE position on UK government action: stop negative projects and commit to genuine action.

The discussions led many people to write messages to global leaders (some of which are shown below) which, while they were many and varied, had two main strands: 1) protect our children and grandchildren who will suffer the worst effects of current policies and 2) no more promises - ACT NOW!

Our estimate of genuine engagements on the day was just shy of 150 we had had the previous week on Castlegate but many of the conversations were more in depth which was good. People were showing a genuine interest in and commitment to action on climate change and the level of awareness was gratifying.

We were also pleased that Louise Haigh, MP for Sheffield Heeley dropped by to talk with us about our campaigning and her recently launched constituency climate consultation. 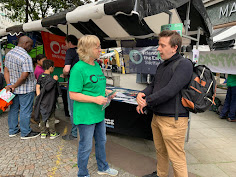 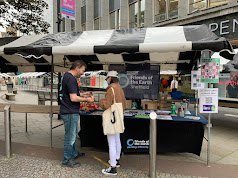 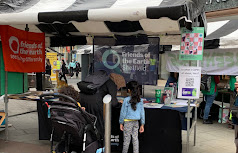 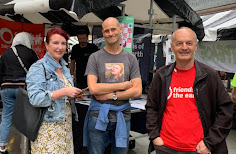 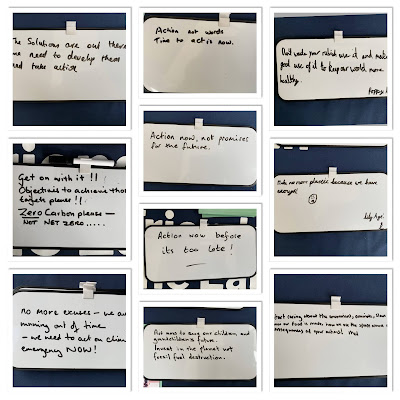 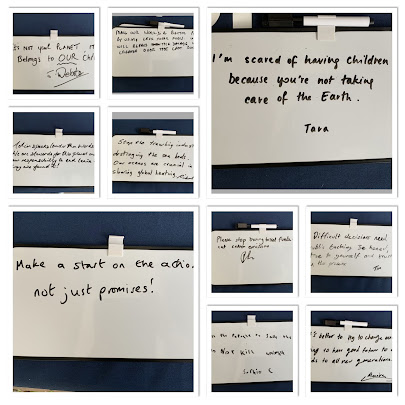