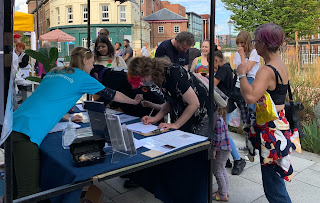 We had a brilliant day at the Castlegate Festival with our Nature Recovery Sheffield partners on September 18th at the start of Great Big Green Week.  The day was the official opening of phase two of the Grey to Green scheme (which was actually completed some 18 months ago) and we were on pedestrianised Castlegate itself, as it runs along the River Don with music and food stalls beside us.   It was a beautiful day and the planting showed itself off to a fabulous extent.  It has been great to see it in different phases over the past three months.  On Saturday, it was resplendent in yellows, oranges, and browns as autumn approaches.

Our campaigning focused on peat and the importance of it as unique habitat and its role as the first line of flood defence as well as its vital importance as a carbon store. A specific petition was aimed at local horticultural retailers, calling on them to stop selling peat based compost - something the industry promised in 2011 that they would stop by 2020; a target missed!

Our stall had examples of sphagnum moss with a sponge standing in for the moss in experiments with how well it absorbed water.  We had plenty of photos of peat bogs in good and bad condition and examples of peat-free composts, including home produced. We also had a sideline in houseplants - pointing out the importance of buying these in peat free compost, in coir pots and ideally grown in the UK.  We drew in the crowds with a free draw for a houseplant which was won (random generator selected) by Russell from Meersbrook and duly delivered to him a few days later.

We engaged with over 150 people on the day and about half of these signed up to Sheffield Friends of the Earth website and/or signed the petition which was great! 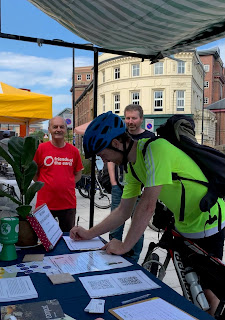 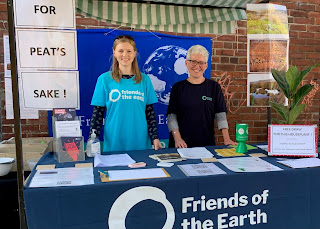 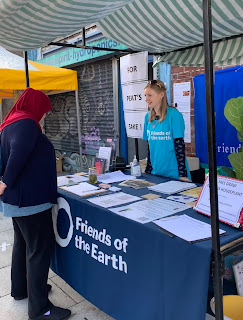