It was wonderful to be able to meet up in person at last! A group of us took the opportunity to take a walk through the city centre and at first we looked at the Active Travel measures introduced both temporarily and more permanently in the city centre that are aimed at making Sheffield  safer and more convenient for pedestrian and cyclists.

The highlight of our  evening though was a delightful stroll through the fabulous 'Grey to Green' Scheme which currently runs from West Bar to Victoria Quays.  Some photos are below and more have been posted on Facebook on Twitter but it's fair to say that we were all blown away by the developments.  For most of us it was an area we hadn't visited for a long time and we had no idea how beautiful and peaceful it had become.

For all its beauty, the scheme is multi-purpose. The creation of the new inner ring road (think Derek Dooley Way) had left the area leading up to West Bar from Ponds Hill roundabout largely redundant - and grey.  It also cut off the developing Riverside Business area (think around the Law Courts) from the city centre - no longer with a main road, true, but with an univiting stretch of nothingness.  At the same time, the issue of flooding from heavy downpours was creating problems as the water flowed down through the city streets towards the river.

The plan developed by the city council and funded through a variety of sources, including the EU, initially narrowed West Bar in the area outside Sheffield Crown Court reflecting much reduced need with the new inner ring road (and making it a much nicer area to cycle or walk) and then as part of the much wider pavement, established drainage channels which through clever alignment drew the water down through a line of flower beds towards the river. 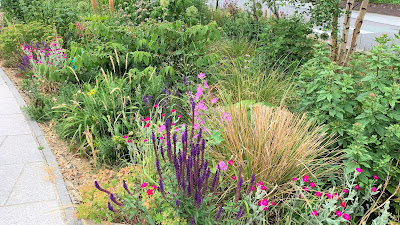 The planting in these beds is superb and what makes the whole area look like one giant garden rather than reflecting drainage channels! The abundance of herbaceous plants through the summer offer a multi coloured glory which changes through the season, and as the summer fades to autumn.  In Autumn and early winter (we are told) the plants stand high in their browns and orange hues but are then cut back in February time to let the bulbs grow up and provide different colour through the spring.  (We'll be back to see them!)  Colourful benches and street art complete the scene - one which all Sheffielders would be proud of. IT has enhanced the area for the increasing number of people who live and work nearby - many of whom are enticed to the area by the environment available. 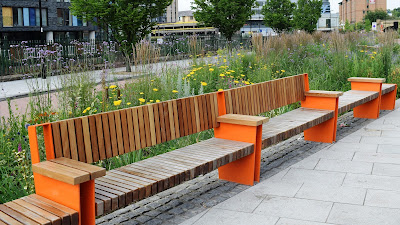 Phase 1 of the scheme was completed in 2016, then Phase 2, which runs along the river at Castlegate and finishes opposite Victoria Quays, was developed in 2019-2020. The traffic here was completely taken away and the route developed for walkers and cyclists. Lessons learnt from Phase 1 about planting, alignment, street use, were extended and developed in Phase 2 but this time there was a much greater emphasis on ensuring there were wider biodiversity benefits.  Before/after surveys showed a 560% increase in biodiversity due to the project (admittedly it was basically a road before!), the planted areas incorporate bee and bug 'hotels' and the street art has both insect homes and bird boxes built in. 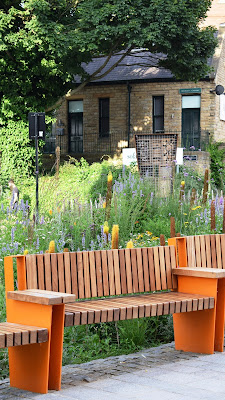 Phase 3, a much smaller area on Angel Street, is being developed this summer (with just about the last ever funds from the EU - well done Sheffield!) and Phase 2 is being formally opened on Saturday September 18th 2021 with a festival running alongside - do take the opportunity to join in - we are confident you'll be blown away! 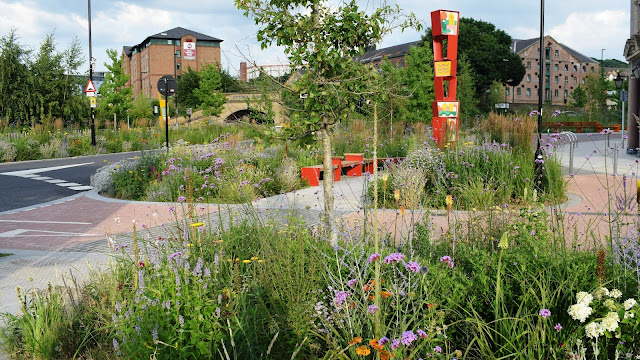