I don’t suppose any review of 2020/2021 can begin in any other way than ‘it is has been a very strange year’! However, after a brief hiatus in the first lockdown period, Sheffield Friends of the Earth have endeavoured to meet regularly on Zoom and campaign via social media and through letters and petitions.

Please note that whenever I write ‘we have met’ below it was always virtual, and also that many of the activities listed have been written up on our website in more detail.

During the past year we have had contact with 4 of the local MPs.  We met as a group with Olivia Blake MP for Sheffield Hallam in August and Gill Furniss MP for Brightside and Hillsborough in order to talk about a green and fair recovery from the Covid pandemic, highlighting the recovery plans outline put together by Friends of the Earth. Some of us were also part of meetings with Louise Haigh, MP for Sheffield Heeley linked to the ‘Time is Now’ virtual lobby in June and with Paul Blomfield MP for Sheffield Central at his Big Conversation session on the climate emergency in October.

Locally, a key issue for us this year was the campaign for Sheffield City Council to declare an Ecological Emergency, alongside the Climate Emergency declared in February 2019.  Our petition generated 434 signatures and was presented alongside a very similar one from Sheffield Green Parents (we overlapped, but then worked together). The council have not so far actually declared an ecological emergency but they accept the need for urgent action to protect nature and put it in recovery locally and have in fact, subsequent to our petition and my asking a question on FoE’s behalf at a full Council meeting, set out a number of actions they will take.

We also wrote to the council in August regarding the poor air quality outside the railway station (FoE research showed it to be the 2nd worst place in the country) and intended to hold a protest outside the station in September but Covid restrictions precluded this. The council belatedly replied but believed the situation to be out of their control and in the hands of the government (grants for electric trains) and the station staff (stopping taxis idling)  Pollution went down during the key lockdown periods but is now returning to unacceptable levels and we will return to this at some point.

A further contact with the council was to send them the Friends of the Earth ‘Emergency Plan for Green jobs’ report in March. An excellent report but to which we have had no reply.  However, as part of a Sheffield Climate Alliance working group, as the local FoE co-ordinator I have met the Cabinet lead for the environment Cllr Mark Jones and Head of Sustainability Mark Whitworth on a number of occasions to discuss the pathways to Net Zero report and participation in these meetings will continue.

The Pathways to Net Zero report was commissioned by Sheffield City Council following their declaration of a climate emergency.  The report was finally made public in March 2021 and has a comprehensive and bold recommendations.  However,  the council has yet to commit to taking any of the steps set out in the report.  As part of the SCA/SCC working group, I will continue to press the council on this.

We have had some more limited contact with Sheffield City Region staff but were signatories to a letter supporting the return of the bus network to local accountability and as part of a focus group on developing net zero carbon approaches within the areas controlled or influenced by SCR.

Nationally, we have been signatories calling for wider support for the Climate and Ecological Emergency bill making its way through Parliament and expressing opposition to the Planning Bill which we believe is anti-democratic and has poor environmental credentials.

Locally we also offered support to Owlthorpe Fields Action Group in their battle to save ancient and regenerating woodland from a brand new housing development on green belt land.  This was ultimately (sadly) unsuccessful but a lot has been learned from the fight.

Several of our meetings on Zoom this year have had speakers, something which has generated increasing interest.  In July, a representative of the local school climate strikers spoke about their commitment and plans.  Guy Shrubsole from Friends of the Earth also gave a presentation about the England Tree Strategy, linked to FoE’s own ‘Double Tree cover’ campaign and which ignited a desire to take part in local community tree planting initiatives when these can recommence.

In January, Liz Ballard CEO of the Sheffield and Rotherham Wildlife Trust gave a presentation about the ecological emergency in Sheffield, linked to our petition. Further work on nature Recovery in Sheffield is developing and we will be part of this.  Nationally Friends of the Earth are also launching a new nature campaign later in 2021.

In February, David Green spoke on the CEE Bill and the ways in which civic society can come together to create change.  The government’s commitment to reach Net Zero Carbon by 2050 came from just such a bill and building up pressure.

In March Catherine Nuttgens, Community Forestry Manager for Sheffield gave a presentation on the work of the Trees and Woodlands team within Sheffield. Fledgling plans to set up a tree planting event are developing from this link.

In February, together with Rotherham Climate Action we planned and ran an online event called ‘Simple Steps to Combat Climate Change’ targeted at people who were wanting to take their first steps, or next steps to make changes in their homes, communities and workplaces which would contribute in its own small way to addressing the climate crisis.  Nearly 90 people attended the Saturday morning event and the feedback received was very good.  One related event has already taken place at a local library and a further event is planned for a local festival.

As a member of the Sheffield Climate Alliance we have the opportunity to work closely with a lot of other climate and nature focused campaigning groups within Sheffield.  Although opportunities to work together or even just to network have been limited this year a developing bid for significant funding from the National Lottery under their Climate Action Fund stream should enable further work in this area.

Currently we are taking a leading role in a series of environment hustings in the run up to local council elections in May.  The impetus and some of the initial planning tools came from the Climate Campaign team at central FoE and it has enabled us to work on something very practical with another 13 organisations within SCA.

Our database of supporters more than doubled this year from 142 in April 2020 to 326 in April 2021. A significant proportion of this increase was related to the petition we ran in January but numbers have increased steadily since then. Monthly updates have been sent out since August 2020 to keep supporters updated about what is happening locally, and to a lesser extend regionally and nationally, related to environmental issues.

We have active Twitter and Facebook feeds which generate interest and ultimately support. On these platforms we share news reports (currently focussing on campaigns against the use of peat in compost, the destruction of native forest in Europe and Canada for wood to be burnt for energy at Drax power station and opposition to the extension of Leeds Bradford Airport.  On Facebook positive news stories about sustainable products and practices are shared together with local developments. Both accounts currently have around 500 followers and these numbers are also growing slowly.

In 2021/22, we hope that there are many more opportunities to get together face:face to campaign, to inform and educate and just to chat! It would be great if more active support grows again though the quiet support offered by those who follow us is welcome and important.

Co-ordinator Sheffield Friends of the Earth 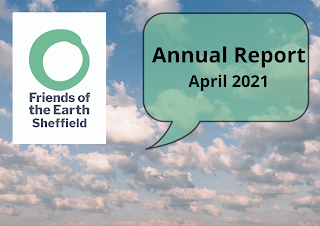