Shaun's article about storing renewable electricity was published in the Sheffield Telegraph on Thursday 13 April 2017. The full text of it is here:

Critics of renewable energy suggest we’ll struggle to power the country because there are times when the wind isn’t blowing or the sun isn’t shining. However, a recent report by Friends of the Earth suggests that the majority of our electricity supply could run on renewables with the right mix of energy storage and smart technologies. Not only is this good for the environment, but it will create employment opportunities for people living in South Yorkshire’s cities.

Water is similar to renewable electricity because it is also intermittent. There are days, and even weeks, when the umbrellas can be put away, but everyone remembers the torrential downpours. The intermittency challenge for water was solved by storing it at different scales from water butts to giant reservoirs, thus allowing the taps to be turned on regardless of the weather.

The water butt storage equivalent for a solar home is to install a battery pack similar to Tesla’s Powerwall. The surplus electricity is stored for use when the clouds pass over during the day and at night when the sun has set. The battery would soon be exhausted if there were a number of consecutive cloudy days, but they could be topped up when there is excess wind power. Clearly it won’t allow homes in this country to be completely self-sufficient so other solutions will need adding to the storage portfolio.

Continuing with the water analogy, there are a number of technologies which could be classed as small dams. These include compressed air, flywheels, pumped hydro and large batteries. Typically they can help the national grid at peak times, but on their own they won’t solve the intermittency issue.

The large scale storage options, equivalent to big reservoirs, include Power to Gas. The basic idea is to run electrolysers whenever there is an oversupply of renewable electricity. These devices split water into its component parts of hydrogen and oxygen.

The hydrogen can be used to fuel hydrogen vehicles, which in principle could be plugged into homes to act as a power station on wheels. Another option is to store the hydrogen in storage tanks which can be converted back to electricity using a fuel cell when required. In some cases it can even be injected directly into the gas network. Because hydrogen can be difficult to store, it is often easier to mix it with other gasses to produce a green gas.

Anaerobic digestion (AD) is a process which allows organic waste (for example, food, manure, sewage and grass) to rot down. The end result is a liquid fertiliser and a number of gasses including methane and carbon dioxide. The methane is normally cleaned up and burnt to generate electricity. However, it would probably be better to pump the methane into the national gas network where it can be used to generate electricity or to heat homes when there isn’t a lot of renewable energy.  The carbon dioxide extracted from the AD process can be mixed with the hydrogen to produce more methane. Again this could be pumped into the gas network for use at a later time.

As the gasses have come from waste plant sources rather than digging up fossil fuels, the process can be considered carbon neutral and isn’t a threat to the planet’s climate.

The first stage of the renewable journey has been to install and demonstrate that renewables work. The big challenge for the second leg of the journey is to ramp up the UK’s renewable capacity along with storage and smart technologies. This will allow us to keep the lights on regardless of the weather, fight climate change and create jobs. 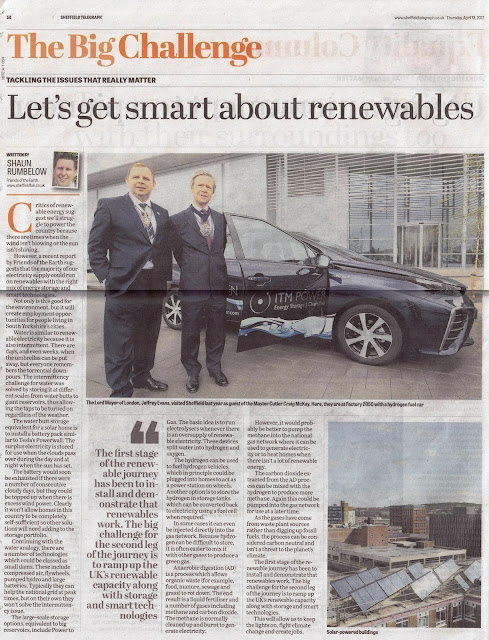