sheffieldeastend.org.uk this wasn't an easy site for me to navigate, but it has a lot of air pollution info.

care4air is the South Yorkshire clean air campaign. This seems to be run by the councils but it does have a lot of info and links.

On the council's digital map there seems to be a view that the city centre air quality is okay. Richard's analysis hasn't found this to be the case. Readings on Lady's Bridge, Arundel Gate near Crucible, Pond Street, Waingate, Leopold St, Fitzalan Sq were all high. There were no tubes on Fargate, Church St, High St, the crossing between Millennium Galleries and SHU on Arundel Gate, around Cumberland St/South St/ Eyre St. There are more gaps around the city centre and the wider city.

There has been a recent entry on the FoE map on Gell St near Springfield School in the city centre. The reading is high which backs up what I was saying.

Sheffield FoE tubes have not yet been entered on the FoE map. The tubes have a shelf life of eight weeks. 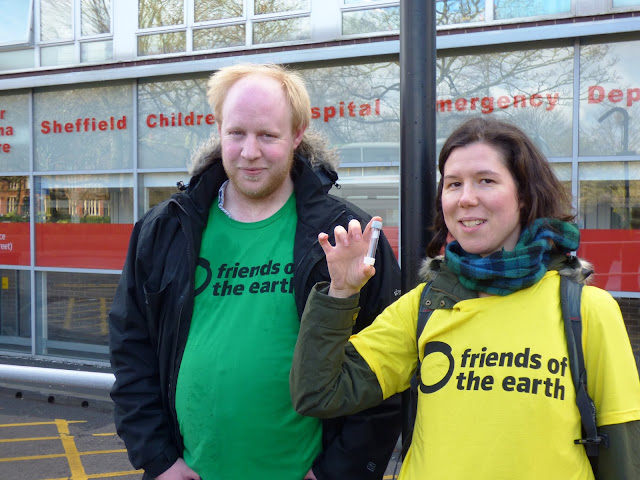 Air Pollution Day of Action:
Richard suggested passing on the media stunt ideas for the air pollution campaign to national Friends of the Earth. Shaun passed them on, along with a copy of the article from the Star where we were installing the diffusion tubes.

Festival of Debate
Aaron has organised a talk for this spring's Festival of Debate. It is called "The Silent Killer: Air Pollution - Q&A" and will take place on Monday 22nd May - 18.00 - 19.30 at the Sheffield University Students' Union - Raynor Lounge. Anyone is welcome to attend.

Our expert panel including Greg Fell, Sheffield's Director of Public Health, Jane Thomas a former senior campaigner with Friends of the Earth UK, Natasha Askaroff (Healthy Planet) and Harriet Edwards (British Lung Foundation) will be discussing the health risks of air pollution, which is estimated to lead to the premature deaths of 500 people in Sheffield every year, and calculated to cause £160 million in lost working days in the city due to illness. Come along and ask your questions about this invisible threat.

Sheffield Friends of the Earth will be contributing £90 for the cost of the venue.

Friends of the Earth Air Pollution Update
Momentum in the fight for clean air is growing. A recent YouGov poll for Friends of the Earth showed that nearly two thirds of adults in the UK are worried about air pollution. But surprisingly, it also revealed that just 1 in 10 think the air they breathe is dirty – despite most areas of the UK breaching EU pollution limits.

To improve awareness of the problem, we’ve launched our ‘Clean Air Kits’ - a ground-breaking citizen science project that enables people all over the country to discover what their local pollution levels are.

We’re delighted that so far over 2,000 individuals and 45 local groups have started measuring pollution near them. The results are plotted on our national air quality map and will inform a report presented to Ministers ahead of the Government’s final air quality plan this summer.

We're planning a week of action from 24 June - 2 July to heap the pressure on the government. Lots more info on how you can get involved soon!

Council Statement on Air Quality
Beatrice mentioned by email that the council's statement on air quality is:

"We want a city where our air quality is good, and where air pollution is reduced to a point well below the European Health Limit values. Despite our efforts to date, Sheffield is still in breach of EU
Air Quality Limit Values relating to Nitrogen Dioxide (NO₂) gas which should have been met by 1st January 2010. A key contributor is road traffic, in particular diesel vehicles, where engine technology is not performing as expected in urban areas like Sheffield. In terms of the standards set by the EU for fine Particulate Matter (PM10) dust pollution, all our monitoring stations are indicating that we are in compliance, although there is no safe limit for this pollutant. Our current approach is to encourage the take-up of low emission fuels and technologies which cause less pollution whilst making public transport, cycling and walking as attractive and easy as possible. Overall however, it is quite clear that air quality in Sheffield has not improved and this is a significant issue for the Council, one which impacts upon our citizens’ health and well-being and the City’s overall prosperity. As a result of a High Court Ruling on 21 November 2016, Government must produce a new National Air Quality Plan in draft by 24 April 2017 with a final version by 31 July 2017. Sheffield was not one of the areas originally identified by the Government as requiring a Clean Air Zone (CAZ) by 2020, but we are aware that a number of additional cities will be mandated to have a CAZ in the upcoming plan. Better air quality is vital for the long term sustainability, health and wellbeing of the city. We are ambitious to improve air quality in Sheffield and are keen to explore a range of measures to improve air quality across the city. "

Budget
This is what the recent budget said about air pollution so hopefully changes will be made later in the year:

"5.11 Air quality “The government is committed to improving air quality, and will consult on a detailed draft plan in the spring which will set out how the UK's air quality goals will be achieved. Alongside this, the government will continue to explore the appropriate tax treatment for diesel vehicles, and will engage with stakeholders ahead of making any tax changes at Autumn Budget 2017."
Air Pollution