on November 16, 2015
Richard, Shaun and Kate from Sheffield Friends of the Earth and Mike Knott, a director from AW Solar, met Louise Haigh MP in her constituency office to explain what we have been doing with the Run on Sun campaign and what the main obstacles are. The main one at the moment is the government's desire to destroy the feed-in-tariff for solar power which makes our campaign for solar schools impractical.

During our summer stalls we collected postcards from the public asking their MP to support solar schools and the Run on Sun campaign. We used this opportunity to hand the relevant postcards over to Louise.

We also mentioned that 27,000 solar jobs are at risk nationally, with 2,584 set to go in the Yorkshire and Humber area. Mike commented he feels that these figures are not realistic and the actual job losses will be much higher - maybe double this.

Before leaving, we created a photo stunt with Kate dressed in the giant sun costume supported by Richard in his bright yellow t-shirt. Next to them was Louise Haigh and Mike Knott from AW Solar who kindly supplied the solar panel for the picture. 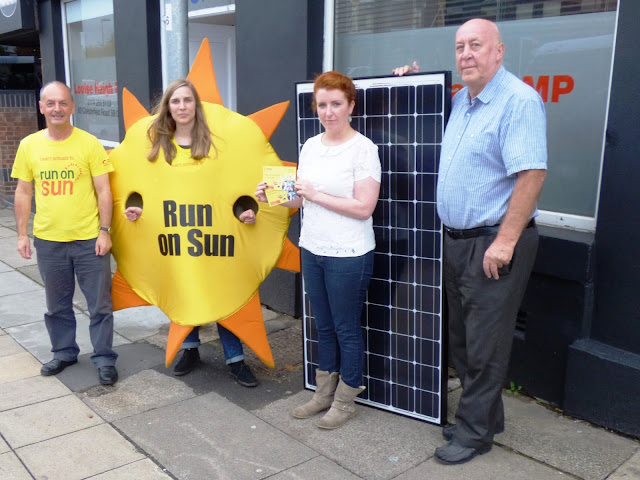 After taking the photos Shaun sent out a press release to the Sheffield Star and other local media organisations. The article was finally published on 19 November. See the article here:
http://www.thestar.co.uk/news/cuts-threaten-city-solar-plans-1-7574835

Louise Haigh also put the pictures and information about her campaign on her website and Facebook page:
http://www.louisehaigh.org.uk/solar_power
https://www.facebook.com/LouiseHaighMP/posts/435323406678635

The one school we did have in the pipeline for having solar panels fitted to their roof now seems to be stuck in the council machinery, but we are trying to contact members of the council to see if we can urge it or push it through. We will keep trying!
Energy Renewables