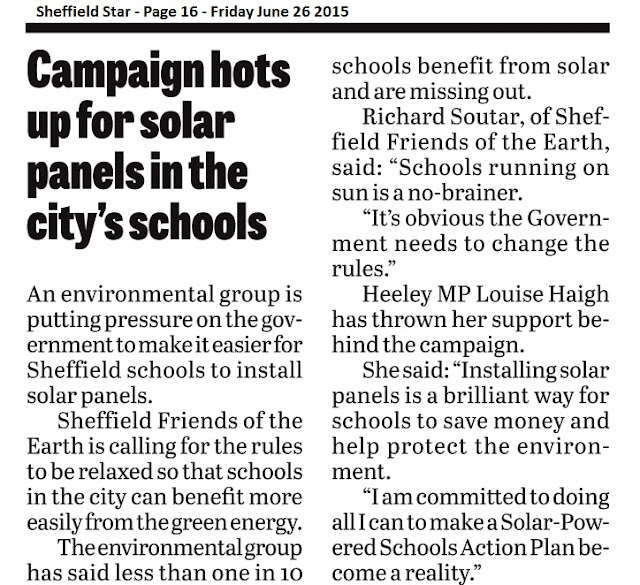 Richard has been to a meeting with Sheffield Renewables, which has the same aims as FoE, but they have more technical know-how. For example, they are able to calculate the potential solar energy output of any roof, using Google Earth.

Richard has been in touch with one school, which is interested, and was given information about other schools.

A meeting has been arranged with Councillor Terry Fox on 19 August from 4 pm to 5 pm. Only one person will be able to attend, apparently because space is limited. That person will be Beatrice, who will need to be briefed before the meeting. There will be a pre-meeting on 30 July before Beatrice's meeting with Cllr Terry Fox.

We have a case study on Hunters Bar school. Shaun will put the existing version of the case study on the website. It can be revised, if need be, when Kiran reports back. It was also suggested that the case study is expanded to give more information, such as a step-by-step guide (including administrative and technical matters) on how to get a solar panel on a roof.

Marks & Spencer's are offering £400,000 for community groups who are interested in renewable projects. Sheffield Renewables have put in a bid for this scheme. however, the deadline is July 29. See our Facebook posts for more details.

The Run on Sun subgroup are meeting on July 21 in the Students' Union at Sheffield University.

New schools are being built in Sheffield, which could be an opportunity for Run on Sun.
Media Renewables