on June 15, 2015
Basecamp is Friends of the Earth's conference for local groups. John, Hayley, David, Kiran and Trisha went to the event in Castleton. Apart from the odd bit of rain they came back energised and lots of great ideas.  David reports on his experience of base camp: 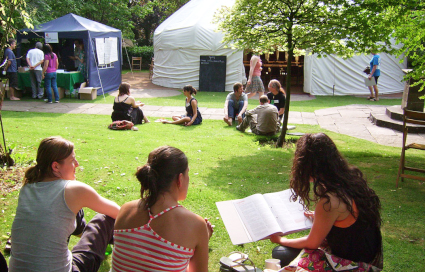 David's Report
All the events I attended were memorable but the one that most stuck in my mind was the John Preedy Memorial Lecture: Overcoming our climate blind spots. "How we miss conversations, conversions and consensus because we cannot even see that they are NOT there. And how, by overcoming them, we can build a strong and powerful movement."

This was a fascinating talk by George Marshall who based his presentation on the book he has recently published entitled :- "Don't Even Think about It: Why Our Brains Are Wired to Ignore Climate Change" He argued that climate change exists for each one of us in the form of socially constructed narratives built upon our values and identity. In the absence of personal detailed study, it is these narratives - not the underlying science or even the evidence of our own eyes- that leads us to accept or reject the issue.

He believes that unless everyone starts talking about the rapid changes in the climate, problems will get worse, and that communicators have to branch out, reaching audiences often not even considered.

As environmentalists we need to be good communicators, not just with like minds, but with with those who currently disagree. Probably, especially those who disagree.

The first step is to stop thinking of such people as "the enemy" and understand what motivates them and how, just like 'us', their thinking is hugely influenced by their particular social groupings. Our task is to find the common ground.

George gave advice on how to talk to a climate-change denier and describes on his blog The Ingenious Ways We Avoid Believing in Climate Change. His organization, COIN, works closely with a U.K-based collaborative talkingclimate.org and with the Wales-based Public Interest Research Centre.