on April 20, 2015
Sheffield Friends of the Earth AGM and election of officers took place at the Red Deer pub at 8pm on the 20th April 2015. Present were Beatrice, John, Hayley, François, Richard, David, Dave, Liddy, Steve, Maive, Kate and Shaun. Apologies were given for Kiran, Trisha and Kerry.

Election of officers
Liddy has been unanimously voted to continue as Treasurer
Beatrice and David have stepped down as Coordinators and Hayley has been voted in as the new coordinator.

Coordinator's Report for 2014 - 2015
Well, what an exciting year we have had. Looking back through my diary it seems that we were doing stuff the whole year and it was dominated by our 40th Anniversary. Yes, Sheffield Friends of the Earth is now over 40 years old.

• We have had two film festivals; the first last May (2014) showing Gaslands II, Trashed, A Fierce Green Fire and More Than Honey. This was held in the basement lecture theatre in the Arts Tower. We all remember how cold it was.
• The second was more recently, linked with the Festival of Debate. Here due to the short time frame we once more showed Gaslands II, and Chasing Ice. All the films were very well received and everyone enjoyed the cakes. Thank you to all who contributed, especially Simon Bowens and David Burley for leading the discussions.

We held so many stalls over the past year and thank you everyone who stood by in the rain, the wind, and the glorious sunshine. We talked to so many people. The model has been a great hit; thank you Shaun for this. And we cannot talk about stalls without a quick mention of the Tour de France. I would like to personally thank the press for sending their 5 helicopters to aid the lifting of our wonderful gazebo up and over the security fence. It has also been most helpful to have the new subgroup helping to coordinate stalls and all the information packs.

After nearly two years of campaigning and hard work we have finally got our Bee Meadow. This is at Burngreave Cemetery and thank you to John and Hayley for stepping in to sow the seeds. I think that we need to go and visit to see our plaque.

Our new campaign is Run on Sun and it is great to have a subgroup to help coordinate this. It would never have got off the ground without your hard work; so thank you.

Also, thank you to Francois for all his hard work coordinating with Global Justice to spearhead our campaign against TTIP. Well done. It all started with a request to write a letter.

Our 40th Anniversary was a lovely event. Andy Atkins, CEO of Friends of the Earth came to help us celebrate. We took him round Smithy Wood, organised a meeting with Jack Scott, the then cabinet member for the Environment, Recycling and Streetscene. We then held a party at the Showroom with lots of food and cake. Thank you all for organising this.

Save Smithy Wood is still on-going but we are aware that it is now a national campaign as a test case for other planning applications under the new legislation. We are often in touch with the local campaigners to lend support.

We have had Basecamp last year and the Yorkshire and Humberside Gathering this year. I hope that all who attended had a great time, and were suitably enthused to keep going as activists. For me the other dominating item is the Green Commission which has involved many meetings, discussions, hearings in public, and back room debates. There is another hearing tomorrow night, and late spring (which maybe early summer) we have to produce a report outlining our vision for making Sheffield a greener, more sustainable city.

I want to thank you all for your help and support over the past year. We work so well as a team with everybody contributing as much as they can to make us a truly remarkable group. And although I will be stepping down as coordinator I will not be leaving. I still want to be part of Sheffield Friends of the Earth and its amazing work.
Beatrice Greenfield
Accounts
Sheffield Friends of the Earth's accounts for 2014 - 2015 are: 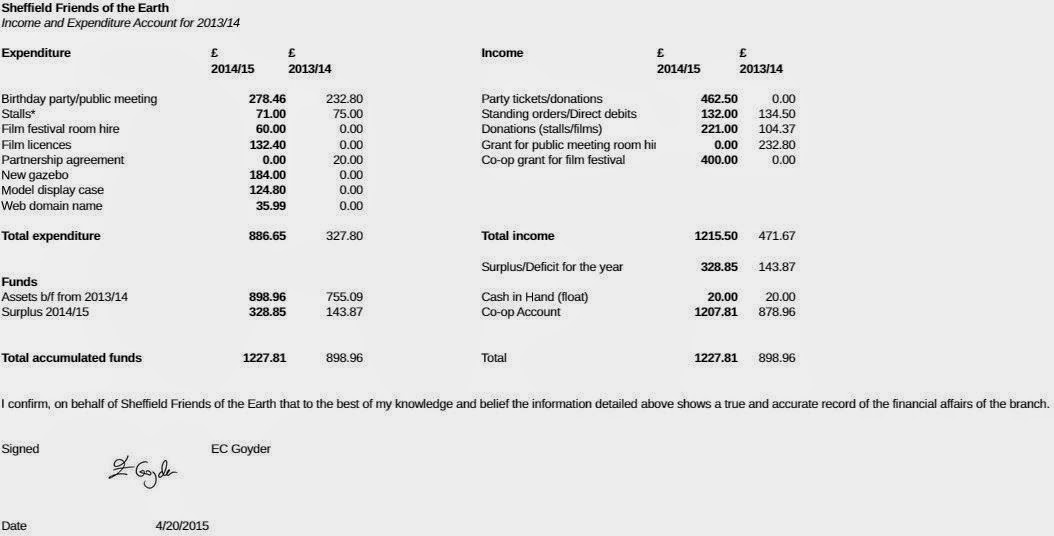