on October 21, 2013
On Saturday 19th October, John travelled to London for a fracking day of action with Young Friends of the Earth. The group called on Lord Browne of Madingley to resign from his position in the House of Lords due to his vested interests in profiting from fracking. This amounts to an enormous conflict of interest because of his influence in government.

Lord Browne was former BP oil chief and is now head of the fracking firm Cuadrilla, which started drilling in Balcombe this summer resulting in huge anti-fracking protests. The campaign group, made up of young people aged 18 - 30 from across the UK, protested outside of Riverstone House, an energy and power-focused private investment firm where Lord Browne is a key partner.

The action was part of Global Frackdown, a global day of action against fracking. Young Friends of the Earth are raising awareness of the dangers of ‘fracking’ for young people and for future generations and continuing the use of fossil fuels is likely to lead the world towards dangerous and irreversible climate change.

John Wilson said: “Young people in the UK are already facing rising debt due to unemployment and university fees.  Now they face the threat of a toxic future from climate change.”

The group spoke to dozens of concerned young people and passers-by through the course of the day. 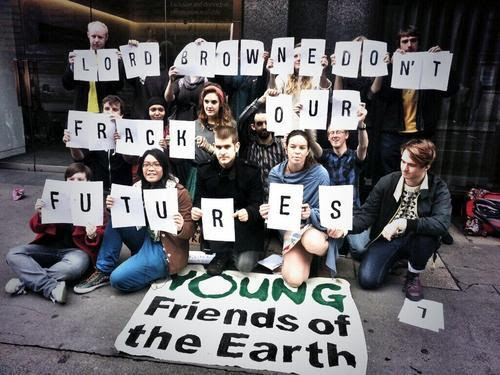 Greg Hewitt, another campaigner in the group, said:

‘With the price of gas continuing to increase the Government should be investing in clean affordable renewable energy, and not the dirty, expensive dash for gas. Everybody we spoke to today said that they don’t want to see fracking in the UK. Fracking produces more dirty fossil fuels that will cause more climate change and even the Government and the frackers admit is unlikely to lower our bills.’

Next year the Government’s dash for gas could quicken as it hopes to open vast swathes of the country to possible fracking with a new round of licensing. This could bring the threat of fracking to thousands more people’s doorsteps although Lord Browne and the Government have the power to prevent this.

The Government’s plans to punch thousands of holes across the country is at odds with public opinion. Recent polling shows that 52% of people would support wind turbines being built within 10 miles of their house compared to just 18% who would support shale gas wells.
Climate Change Energy Fracking