on April 15, 2013
Clean British Energy Campaign
This has mainly focused on people signing postcards to urge the government to invest in renewables rather than following a ‘Dash for gas’.  If gas fired power stations were built it would mean the UK would not achieve it’s Climate Change targets, it would mean less green jobs and higher fuel bills as gas prices continue to rise.  People were also encouraged to earn a CBE certificate by switching to a power company that invests in renewables such as Ecotricity or Good Energy.  A petition to make Sheffield a Frack-free city was started with Sheffield Climate Alliance.  A photo stunt entitled ‘Green is working’ to promote green jobs was held in October.  A display of photographs featuring Renewable Energy was set up in the Town Hall foyer in December. 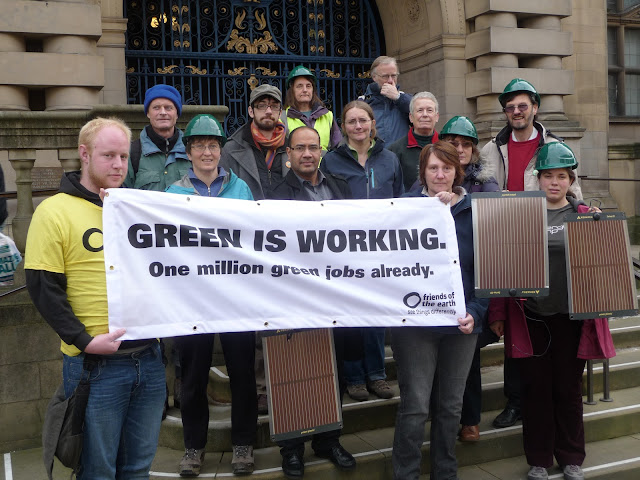 ‘Energy we can all afford’ public meeting – Clive Betts MP (Labour), Cllr Joe Otten (LibDem) Simon Bowen (FoE) Craig Jackson (SYHA & LiveGreen) and Emma Bridge (Sheffield Renewables) answered questions from the public about the rocketing fuel bills, green jobs and climate change.  The meeting held at The Circle on Rockingham Lane, was organised by Sheffield Friends of the Earth in collaboration with Sheffield Campaign Against Climate Change.  It was held despite heavy snowfall and hope it influences Decarbonisation targets being included in the Energy Bill.

The Bee Cause
In July we held a Bee Breakfast with Meg Munn MP & Cllr Isabel Bowler and were featured on Radio Sheffield by Paulette Edwards.  In September Cllr Jillian Creasy and Cllr Sylvia Anginotti attended a Bee Walk.  There was a petition for a National Bee Action Plan and cards for people to sign.  Free seeds, wildflower posters and booklets made this a very popular campaign.  A bee map where people had marked their bee friendly gardens was displayed in the Town Hall foyer in September.  The group are currently searching for a site to plant a bee meadow in Sheffield. 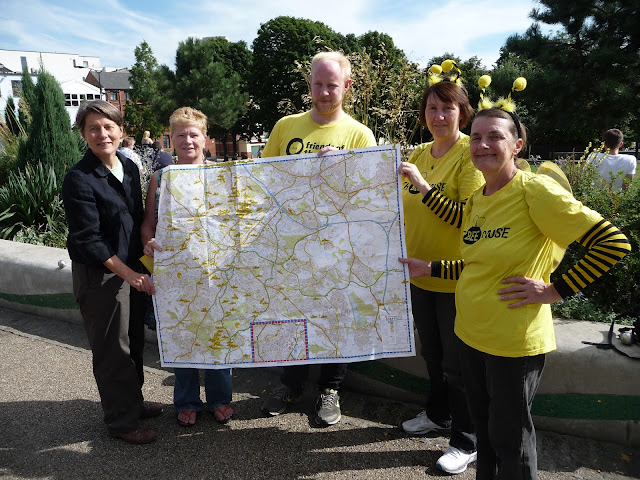 Make it Better Campaign
Some smart phones contain tin which comes from Bangka Island in Indonesia causing devastation of the environment.  E-mails were sent to Samsung and Apple.


Litter Pick
We conducted our litter pick on Penistone Road on the Jubilee Holiday Tuesday 5th June 2012.  We wore masks of the Royal Family and were featured in the Sheffield Star newspaper.

Free Green Film Festival
As a result of a ‘buy two get one free’ offer at Dogwoof films, we showed ‘The Island President’, a very recently released film, on 30th May 2012.

The latest film festival will take place in the Spring 2013 with four films being shown on successive Wednesdays at the Red Deer pub beginning with Blue Gold on 17th April.

Stalls
We have run 9 stalls at: Environment Week, National Climate Jobs Caravan, the Green Fair, Firth Park Festival, Lowedges Festival, Ecclesfield Gala, Sheffield Food Festival, Riverlution and Peace and Craft Fair
Facebook, Twitter and Website
Sheffield FoE now has an active presence on Facebook and Twitter thanks to John who tweets and posts regularly.  Shaun has radically updated the website so it has a fresh modern feel.

Speakers
Dave Berry from Sheffield Renewables spoke at the September meeting about the share offer.  As a result of this it was decided that Sheffield FoE should buy a share.  Malcolm Lee of Sheffield Forgemasters spoke at the February meeting on the subject of ‘A Manufacturing Perspective on UK & EU Climate Change Policy’

Training
Members have attended various training sessions including the FoE Northern Gathering at Haworth, Local Groups' Conference in London, Planning Masterclass (Richard) and the Bee Prepared Day in Darlington.  There were also more varied local training days such as Planning and Sustainable Housing.