Energy we can all afford meeting

on March 22, 2013
Energy we can all afford meeting - The Circle 22nd March 2013
Sheffield residents braved the adverse weather conditions to attend a public meeting at The Circle on Rockingham Lane yesterday evening. They were invited to put questions to Clive Betts MP (Labour), Cllr Joe Otten (LibDem) and a panel of speakers, Simon Bowens (Friends of the Earth), Craig Jackson (SYHA LiveGreen) and Emma Bridge (Sheffield Renewables), about rocketing fuel bills, green jobs and climate change.
The event, on the theme of ‘Energy we can all afford’, was organised by Sheffield Friends of the Earth in collaboration with Sheffield Campaign Against Climate Change.  It comes as MPs debate the Energy Bill in Parliament to determine how the UK sources its electricity for the next generation – as households feel the pinch of winter energy bills. 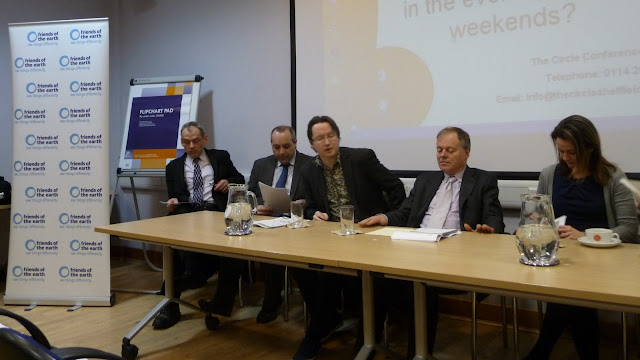 Simon Bowens explained how a government investment of £100bn over the next 10 years was needed to replace the energy infrastructure.  Energy was the cornerstone of cutting carbon.  The present plans of George Osborne to extract shale gas and build more gas-fired power stations in a ‘Dash for gas’ should be relegated to ‘plan z’.  Since 2004 average fuel bills have risen £290 due to rising gas prices. He pointed out that £1.3bn less money will go into fuel poverty this year than in 2009 and described the campaign aim of using carbon taxes to make our homes more energy efficient.  The only time energy prices come down is when there is investment in renewable energy.  The price of solar power has dropped dramatically since the introduction of the FIT tariff.
Clive Betts thought that in the history of the 21st Century, Climate Change will be a major topic.  The problem is that most people will recycle rubbish but won’t change their lives significantly.  Where can we put onshore wind turbines if everyone opposes it?  How can we store it?  ITM Power on Brightside Lane is working on this by converting the excess energy into hydrogen, which can be burned as a fuel.  As power prices go up there is more fuel poverty.  The Green Deal is a good idea but the interest rate is too high at 7.5%.  A major energy saving measure would be to decommission old boilers.  Clive will sign up to Tim Yeo’s amendment that the Energy Bill should include a decarbonisation target. 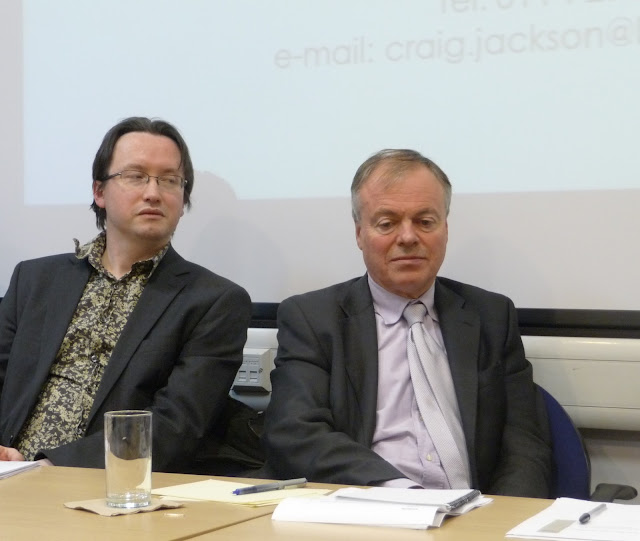 Joe Otten is keen for everyone to sign up to the Green Deal, as it would make improvements to ensure energy bills are cheaper although there would be no gain until the loan is paid.  Some of the most poorly insulated properties are in the private sector and the Green Deal enables tenants to carry out improvements, which are paid for through their energy bill savings. He suggested that the reason it was difficult to move faster on sustainable energy was concern for other issues such as keeping costs down, which most of the public would regard as more important.
Emma Bridge said Sheffield Renewables was a social enterprise designed to develop community energy schemes and increase awareness around sustainability and energy saving. But there was no clear backing from Government for this approach which has slowed development and increased risks. She pointed out that Sheffield has the highest solar power output per capita of any UK city.  Sheffield Renewables hopes to use renewable energy to grow communities. Its Jordan Dam project has had to be shelved due to the cost of two fish passes required by the Environment Agency. Only one was originally anticipated and each costs about £100,000.  It is proposed that the £217,000 raised from a share offer is invested in community solar Photo Voltaic projects.  This will be discussed at the Special General Meeting on Tuesday 26th March.  The government and council need to facilitate the use of cooperatives rather than large companies.  The public are enthusiastic about renewables but support is needed for decarbonisation to happen.
Craig Jackson explained South Yorkshire Housing Association was founded in 1972 and LiveGreen was set up last year to work on environmental projects. 600 of SYHA houses had been installed with solar PV before the FiT subsidy was suddenly reduced. If you spend more than 10% of your income on energy or are in a home that cannot be kept warm at a reasonable cost, then you are suffering from fuel poverty.  In a survey of tenants, 83% would make a financial contribution for improvement works to reduce bills.  Most SYHA houses are already insulated to a good standard yet 63% of tenants still significantly unheated their homes. Pre-payment meters are popular but by using these, the poorest people are paying the most for their energy. Rising bills are a problem as for every 1% rise in fuel costs puts another 4,000 more households in fuel poverty. Nationally, the Hills review predicts 8.5 million people will be in fuel poverty by 2016.
A lively Question and Answer session ensued.  The following points were made:
Chris Broome of SCACC explained that a 100g of CO2 / kWh was not good enough by 2030 and there is only a 37% chance of meeting a 2oC rise if China and other countries cut emissions the way we hope.
Aaron Thierry of SCACC said a target of 50g of CO2 / kWh would at best give only a 50:50 chance of a 2oC rise.
Cllr Jillian Creasy (Green Party) was in favour of a grant system rather than the Green Deal.  She felt that playing with energy bills couldn’t solve social justice problems and Tim Yeo’s amendment must get through.

Other questions from those attending included some about why politicians were not doing more to respond to increasing evidence of the threat of climate change. One man claimed that a draft IPCC report stated that the risk of the more catastrophic future scenarios occurring had receded but this was disputed. 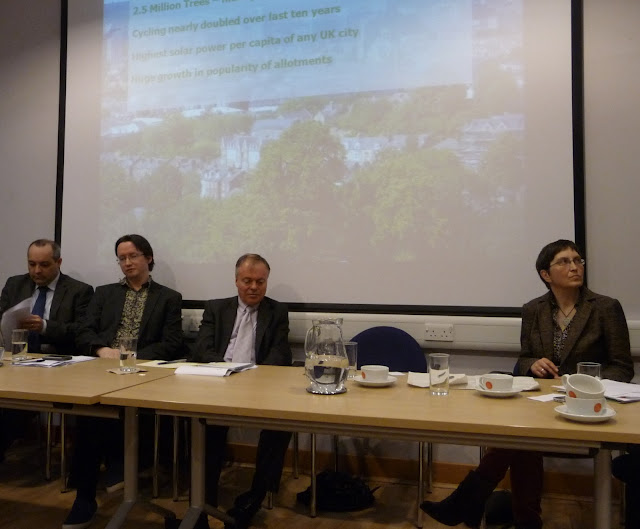