on March 25, 2011
Sheffield Friends of the Earth campaigners organised a stall at the Age of Austerity’ Tea dance at Sheffield Town Hall on Friday 25th March.  It was an event around the theme of low cost / low energy living, taking its inspiration from the 1940s when everything was rationed. The organisers looked wonderful, dressed up in 1940s outfits, they were playing "big band" music from the era, the hall was beautifully decorated with union jacks, and everybody was given "old money", from pre-metric days, to pay for the refreshments. Unfortunately the theme does not seem to have caught the imagination of the people of Sheffield and there were very few visitors. 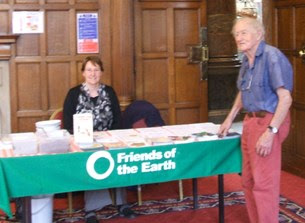 We had decided it was a good opportunity to encourage people to think about their diet and cut down on their meat consumption. We had a book of recipes from the war years - when the diet was very limited, which we thought would attract attention and be a talking point (which it was), and we gave out free samples of lentil salad and numerous recipes for dishes requiring little or no meat, but unfortunately there were very few people to appreciate our efforts. However, those who did come to the stall, did seem to be genuinely interested and keen to try out the recipes.

At least Amyan, Beatrice and Trisha had a very relaxing afternoon, and Trisha didn’t  have to worry about what to eat for the next few days and she had a fridge full of lentil salad.
Group Photos