on October 13, 2010
Sheffield Friends of The Earth organised a month long Green Film Festival - a gala of green flicks for eco-lovers and film fans. There was a green-themed Indy film every Wednesday from 13th October until 3rd November, but unfortunately there was no Al Gore.

Premiering on Wednesday 20th October in a Royal Hallamshire Hospital’s School of Medicine Lecture Theatre was a hard hitting documentary about over fishing called The End of the Line. Afterwards, there was an interesting and lively discussion about solutions to over fishing hosted by Manchester Friends of the Earth’s fisheries campaigner. 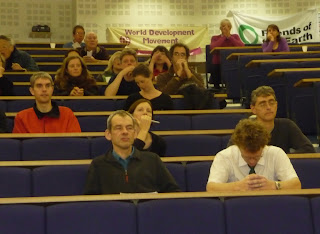 Who Killed the Electric Car? was the second film to appear on the big screen. David Garlovsky gave a pre-film talk about members of his family who were interviewed in the film for developing the car’s sophisticated battery technology. After revealing the answers to the murder mystery puzzle, Dr Andy Young from Sheffield Hallam University’s engineering and sustainability department and Friends of the Earth’s Simon Bowen were on hand to give the audience an up-date on the situation with electric cars from a political and engineering view point.

The third eco-film, Vanishing of the Bees looked at the problems facing bees, from Colony Collapse Disorder, the use of pesticides and farming monocultures. Pete Riley, Penistone Friends of the Earth and once National Friends of the Earth food campaigner, was on hand after the screening to update the audience on the latest news and to take questions. People were asking how they could help and we were on hand distributing free wild flower seeds donated by the Cooperative. The film also coincided with the launch of the new Sheffield Beekeepers’ Association. This topic caused a lot of interest as it was the most attended film in the festival. One person in the audience even encouraged his grandson studying at Sussex University to screen the film at the university.

The End of Suburbia was also the end of our film festival. It focused on the American Dream of suburbia and cheap energy. It looked at how the American way of life will have to change as the global demand for fossil fuels will soon outstrip supply. The final questions and answers session was hosted by Dr Malcom Denman of Sheffield Hallam University.

Not only did we show a diverse range of films, but we managed to provide our audience with a range of drinks and cakes that Betties Tea room would have been proud of. Most of the catering was provided by medical students in aid of charity but our own Jamie Oliver, Matthew Bryning, stepped in to provide refreshments and home made fair trade/organic cakes when the students were unable to attend. If that wasn’t enough, the refreshments at the final film festival were provided by Engineers without Borders and their pedal powered smoothie maker.

Much publicity had been obtained before the event on various websites, local newspapers and within the hospitals and universities. On the opening night of the festival, Beatrice publicised the event on BBC Radio Sheffield’s Drive Time programme.

Sheffield WILPF, WDM and the United Nations Association helped make the film festival possible by giving a generous donation towards the event. The remaining money was raised by asked for a £1 donation and selling drinks and cakes. Due to the nature of the event we purchased some cheap eco films on DVD which we resold at a slightly higher price. After selling all but one film we decided to purchase some more for our general stalls.

Following the success of the Green Film Festival, our Co-ordinator, Beatrice Greenfield, was invited to sit on a panel at the Sheffield Documentary Festival.

Plans for a film festival next year will be considered at future meetings. We will look to secure more funding as we made a small loss of about £16. We’ll try to explore ways of linking in with the nationally recognised Sheffield Documentary Festival. We’ll keep you posted on events throughout the year.