on April 15, 2010
On Thursday 15th April 2010, prospective MPs met members of the public in a packed meeting organised by Sheffield Friends of the Earth. On a night when the party leaders were debating on TV, local people turned out to see some live politics. Paul Blomfield (Labour), Paul Scriven (Lib Dem), Nicola Bates (Conservative) and Jillian Creasey (Green) presented their views on developing a green economy and then answered questions from the audience. 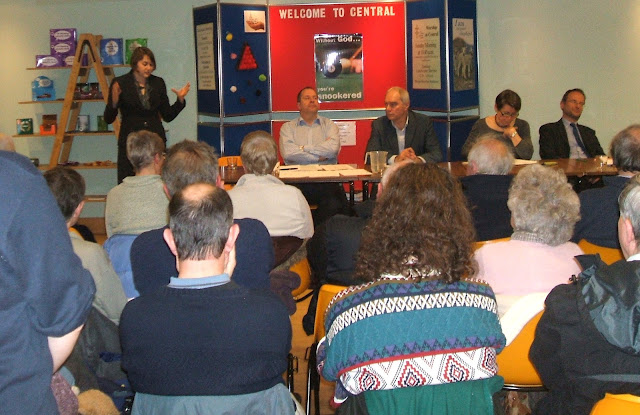 The environment has not figured in a big way in the national campaign but all four candidates were keen to stress the green credentials of their parties. Paul Blomfield was happy to stand on Labour’s national record, highlighting the passing of the Climate Change Act and hailing John Prescott for his role in the Kyoto agreement and Ed Milliband for his role in the Copenhagen negotiations. Nicola Bates in response pointed out that it was a Conservative government that introduced the Clean Air Act and had their own green hero in John Gummer, the first Environment Secretary. Paul Scriven emphasised the need to keep the environment high on the agenda in times of economic difficulty, and the need for local, national and international action. Jillian Creasey asked to be judged on the record of the three Green Party City Councillors in promoting warm homes, wind energy, bus regulation and allotments.

Swords were crossed on several issues. Paul Blomfield pointed out that the City Council, led by his Liberal Democrat opponent, had opposed many local wind farm proposals, but Paul Scriven countered by highlighting that Hillsborough Labour MP Angela Smith had also opposed a local wind farm application. Although all the candidates supported the idea of a Robin Hood tax on financial transactions, Paul Blomfield reminded us that Conservative MEPs had opposed the tax in the European Parliament. Nicola Bates responded by pointing out that Labour had their chance to introduce the tax in the budget but didn’t take it.

The candidates were not afraid of having big green ideas. Jilian Creasey likened the threat of climate change to the threat of war and proposed personal carbon quotas for all citizens. Nicola Bates suggested following Boris Johnson’s proposal in London to introduce electric points for cars across Sheffield. Paul Scriven wanted Sheffield to be the first city that is a micro-generator of power. Paul Blomfield reminded the audience that Sheffield Supertram was Labour’s big idea and wanted to see similar bold developments in wind power.

Steve Goodacre of Sheffield Friends of the Earth said: “It was good to hear the candidates are committed to protecting the environment and doing something about climate change. Hopefully, whoever wins the election will remember these commitments when they are in power.”