on April 05, 2008
On 5th April Sheffield Friends of the Earth staged a publicity stunt outside the Town Hall together with members of Sheffield Campaign Against Climate Change.  A volunteer dressed up as Gordon Brown and members flew planes about his head while he covered his eyes and ducked. 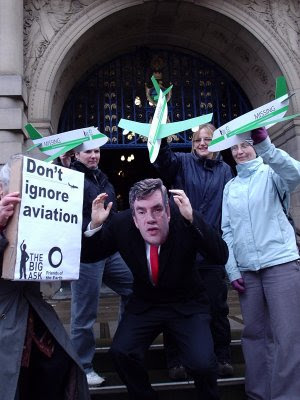 This action was part of a week of events organised by Stop Climate Chaos and focussed on the international aviation part of the Big Ask.  The Climate Change Bill will become law this year.  Currently the Bill is not strong enough to realise the carbon dioxide emission cuts that are needed to ensure global emissions are kept below dangerous levels.  The three key amendments requested by Friends of the Earth are:
An increase in the overall target for 2050 from 60% to 80% reductions in carbon dioxide
The inclusion of the UK’s share of international aviation and shipping emissions
The adoption of annual targets rather than the 5 year budgets currently suggested
So far 172 MP’s have signed the Early Day Motion (EDM 736) including MP for Attercliffe Clive Betts: “My constituents tell me they are worried about climate change and want to see the government take action. That is why I will support a strong Climate Change Law which commits the UK to cutting its emissions by at least three percent annually and which covers all emissions – including the UK’s share of emissions from international aviation and shipping.”
Maureen Edwards was interviewed by Gareth Evans on Radio Sheffield and made the following points:
Maureen Edwards said: to the Sheffield Star, "It's crazy for Gordon Brown to leave out climate changing emissions from planes and ships from the new Climate Change Law.
"Why should our local industry and businesses be held to account for their carbon emissions but not the aviation industry?"
The World Development Movement, Friends of the Earth and Sheffield Campaign Against Climate Change are all hoping that as a result of this and other actions more local MP's support The Big Ask, particularly Heeley MP Meg Munn.
Read the article in the Sheffield Star at
www.thestar.co.uk/headlines/Greens-tell-PM-to-come.3954699.jp
Climate Change Transport