on May 29, 2007
On Tuesday 29th May, Maureen from the Sheffield Friends of the Earth group joined others from the No M1 Widening group to protest at the cost of widening 115 miles of the M1.

The protesters marched a kilometre through Sheffield city centre in protest at £5.1 billion plans to widen the M1. Maureen and others suggested using the money to provide solar power for homes. It was calculated that each metre of road widening could fit two homes with solar power. Maureen said to the local newspapers, “The government keep talking about climate change and yet which of these two ideas is going to make a difference to that? 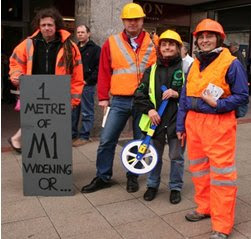 “The M1 widening is going to have a detrimental effect, increasing carbon dioxide emissions to make climate change worse. But, if this money was invested in things like solar power and wind turbines, we would be helping the environment and climate change.”

“It would be better spent than on widening the M1 which, in five years’ time, will be just as congested as it is now because there will probably be even more traffic on it.”

Mark from the No M1 Widening group suggested government grants for solar heating should be increased to make it cost effective for people to switch to clean renewable power. He told the media that “It costs about £6,000 for solar panels but a grant of just £2,500 towards it means there is no incentive. The cost of widening the M1 has gone up by 37 per cent to £5.1 billion but, while there is an increased budget of £18.5 million in the government’s Low Carbon Homes fund, the amounts given in individual grants have been cut.” 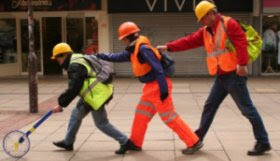 The M1 plans have been in the national media recently including the Guardian revealing that in the East Midlands they are planning to widen to 4 traditional lanes, and use the hard shoulder, making a 10 lane motorway.  The cabinet re-shuffle means we have new transport and roads ministers. Please write a new letter of objection to Tom Harris MP (Minister for Government Road Schemes and Rail) or Ruth Kelly MP (Transport Minister) Department for Transport Great Minster House, 76 Marsham Street, London, SW1P 4DR