Derby witnessed the largest police presence since the miners’ strike with two-thousand police officers on duty at a cost to the tax payer of over two million pounds.  The police operation was mounted to protect the environment and development ministers at the G8 meeting at Breadsall Priory located on the periphery of Derby. On the agenda were issues such as Africa, climate change and logging of timber. 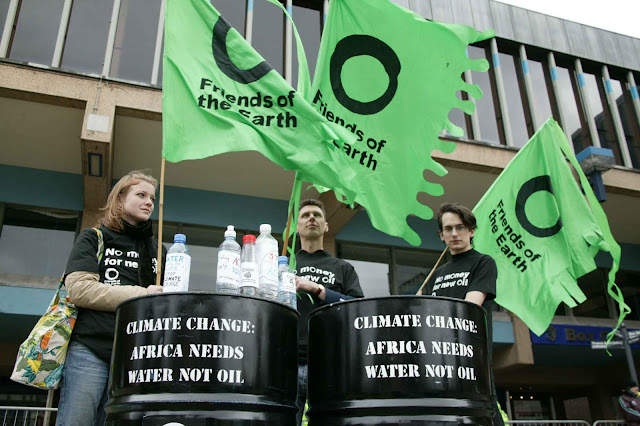 Friends of the Earth groups were planning to walk to Breadsall Priory to deliver bottles of clean water to the ministers with the message, “Climate Change: Africa needs water not oil” but this had to be cancelled when Charles Clarke, the home secretary,  banned the walk.

Instead, Shaun and Chris from the Sheffield group  joined forces with other FoE campaigners and People and Planet groups to protest in Derby city centre. The picture in the top right hand corner shows the demonstration.

The protest was covered by the local ITV news stations, the BBC,  Derbyshire radio stations and newspapers. The message FoE projected to the media was that our right to peaceful protest had been denied and climate change means that 63% of the world's population could face significant water stress by 2025. Friends of the Earth is calling for industrialised nations to stop pumping our money into environmentally and socially damaging projects, such as new oil developments, and instead start investing in a sustainable future.

Later in the day, when most other environmental protesters had gone home, Friends of the Earth and People and Planet managed to gain exclusive access for five campaigners to visit Breadsall Priory for a photo shoot and the slim chance of meeting Margaret Beckett. Both Shaun and Chris from the Sheffield group volunteered and so too did Anna from the Sheffield branch of People and Planet.

This was a major achievement as the Guardian newspaper later reported that journalists and even some of the delegates attending the meeting experienced major hurdles trying to penetrate the tight security.

In Derby city centre, the protesters boarded a police van before making off to the 5 mile exclusion zone. In addition to numerous road blocks, steel fencing had been erected around the priory and a metal road had been laid for fully staffed riot vans to patrol the perimeter. Before getting to the main entrance of the priory all protesters were given a full body search before the remaining journey could get under way.  While being searched, it was noticed that the local church had draped a large “Make Poverty History” banner from the steeple.  A resident of Breadsall demonstrated  his support for the campaign by shouting something along the lines of  “well done lads, you’re doing a good job”

Once at the main entrance, the five protesters had to wait in the van while the police formed a defensive line to prevent campaigners making a run for the priory. A photographer from the Guardian newspaper took several pictures of the protest before being returned to the city centre by the police. 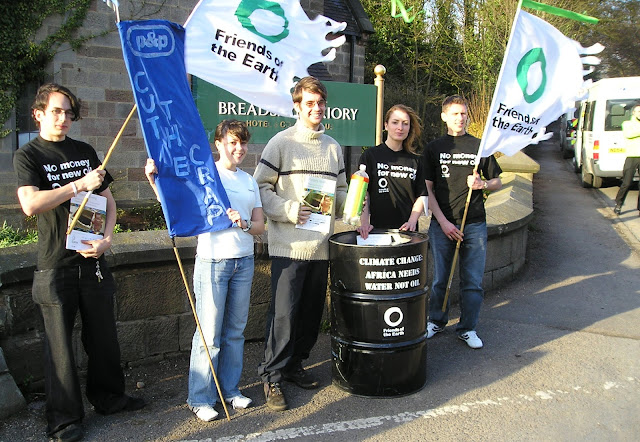 For more details and photos see our website at www.sheffieldfoe.co.uk
Climate Change