Sheffield Friends of the Earth united with Greenpeace and the Sheffield Green Party on Saturday 19th February 2005 to highlight the inauguration of the Kyoto Protocol and to raise public awareness of climate change. 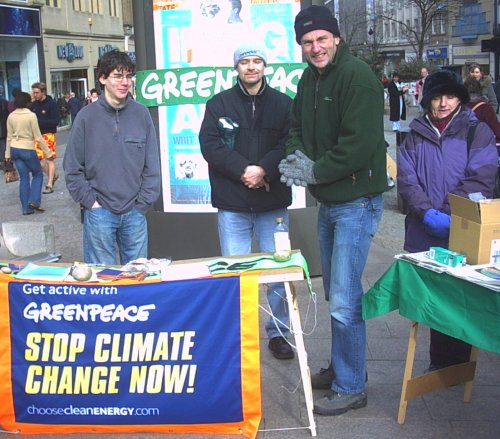 A total of 141 countries have signed up to the Kyoto Protocol, but the US and Australia have abstained for economic reasons. The protocol requires a 5.2% cut in greenhouse gas emissions by 2012 with each country having its own targets according to its pollution levels.

The Kyoto stalls on the top of Fargate were used to collect hundreds of signatures from the public calling on Sheffield City Council to improve energy efficiency and reduce green house gas emissions. Representatives from the three green groups will present the petition to the council in March.

The Sheffield Friends of the Earth stall was also used to distributed more energy saving light bulbs to the public as a way to engage people in thinking about saving energy at home. For people unsure about the causes and impacts of climate change we handed out simple to understand booklets.

Although the petition and distribution of  energy saving light bulbs had been a success, the real star of the show was Maureen’s new electric car. It managed to attract the attention of the public as it is very easy to park and is exempt from road tax. If that’s not good enough, it costs less than 1p per mile to run and emits no polluting gases when being driven around Sheffield. As Maureen’s energy supplier is using renewable energy sources such as wind power, it causes no pollution when re-charging the battery. With a price tag of only £6,000  many people expressed an interest in purchasing one for work and shopping trips. 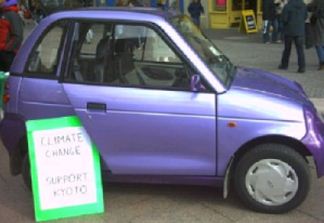 The only downside to the electric car is its limited range of around 40 miles and a top speed of 40 mph.
For anyone interested in purchasing a new electric car, or just to find out more details, visit the website www.GoingGreen.co.uk