on May 26, 2001
95% of Britain’s peat bogs have been damaged or destroyed. Thorne and Hatfield moors are the largest remaining areas of raised peat mire in the UK. Despite the negative ecological impact of peat cutting, it continues on both Thorne and Hatfield by an American owned company Scotts that use peat as a base in their compost products. It has been estimated that at the current rate of extraction there will be little left of Hatfield moor in just three years.

Leeds and Sheffield Friends of the Earth and other interested parties timed an event at Hatfield moor to coincide with the beginning of the peat cutting season which commences when the peat is dry enough to allow successful extraction. During the morning Leeds and Sheffield Friends of the Earth collected messages from the locals of Thorne and the surrounding area that were written onto cards, placards and balloons. The locals are aware of the damage that has occurred on the moors and many pleas to stop the cutting were collected from people of all ages. During this activists from the northern area were taken on guided tours of the site and learnt about the process of peat cutting.
In the afternoon all parties gathered and formed a peaceful procession to the peat works armed with placards and messages for Scotts to halt the destruction of the moors. The messages gathered in the morning were handed to a security guard on site to pass to the manager in the hope that Scotts would understand the impacts of their actions, and the feelings of many people who would like peat bogs to remain a part of the British countryside. 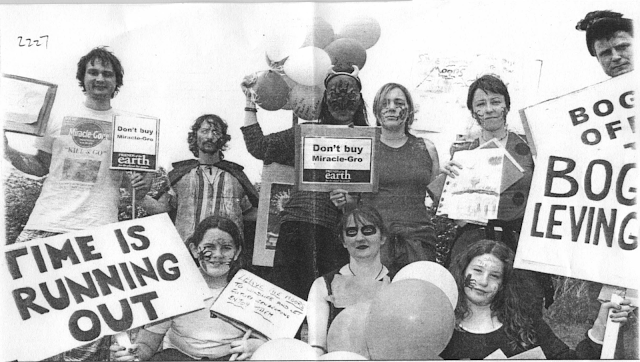 The day was a success with media attention, more pressure on Scotts, disruption of their usual undertakings of the day and a good example of peaceful direct action. It was a good opportunity to understand the depth of the problem, the feelings of conflict the locals have to save their moors but the need for employment, the negative impact that the processing plants’ heavy traffic that impinges on the nearby residents and the piles of stacked compost at the works that had formerly been the basis of flora and faunal survival on the moor. Overwhelming was the beauty of the remaining moor and the amount of life it supports in comparison to the baron patches, the surface of which has been cut away. It made many people more determined to do all they can to save the moors of Thorne and Hatfield.