on March 30, 2001
There are many environmental concerns facing Sheffield ranging from flooding, food scares, problems with transport and waste incineration, not to mention the recent foot and mouth epidemic which caused the closure of much of the Peak District leaving many people in financial crisis. As a result Sheffield Friends of the Earth felt that the environment should be a key issue locally in the general election. We therefore decided to launch the Green X Code campaign in Sheffield to allow the public to gain a more informed vote. We felt that the residents of Sheffield had the right to know whether each of their prospective parliamentary candidates from now on referred to as PPCs) were going to address Friends of the Earth’s five green targets(1). At the same time we hoped that the PPCs would realise the public were concerned about their environment and wanted the problems to be addressed. We therefore held a public meeting to allow discussions of public concerns and to see what exactly the prospective candidates had to say for themselves.

First a street stall was held in Sheffield city centre where people were invited to send the Green X Code postcards to the PPCs in their constituencies with all the information they needed provided. It also gave us the opportunity to invite them to the public meeting. 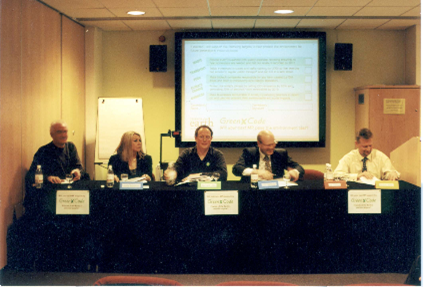 Sheffield’s PPCs were invited to show their green credentials at a public meeting that was held on Friday 30th March 2001. It showed exactly how much our local politicians really care about the environment, and about 30 of the public came along to voice their concerns, The public meeting focussed on two main constituencies, Sheffield Hallam and Sheffield Central, and all of the PPCs from the main parties were invited. However, not all of them managed to make it. The Hallam candidates were represented by Richard Allen (Lib Dems) and John Hartman (Cons), Gill Furniss (Lab) failed to turn up. From Central Noelle Brelsford (Cons) Bernard Little (Green) and Nick Riley (Socialist Alliance) attended. Richard Caborne (Lab) and Ali Qadar (Lib Dem) were too busy to attend. However, we did receive a post code from Ali Qadar with a cross against each of the five targets.

At the meeting Bernard Little and Nick Riley showed their support for all targets. Richard Allen supported the food, climate change and business targets fully. He would only accept the waste and transport targets with some qualifications as he felt that he could only cross those targets that could realistically be met. Both the Conservatives and Labour candidates refused to put a cross against any targets as they thought it an inappropriate way to show their support of environmental targets.

The issues discussed at the meeting ranged from the local, for instance cleaning up Sheffield parks and the incinerator to how the PPCs thought the global issues should be tackled, for instance reducing CO2 emissions, the problems with George Bush and the Kyoto protocol, GATS and food safety.

This provided a very interesting meeting and the outcome was positive. The PPCs could see that the Sheffield public were very concerned to have a safer and healthier environment for themselves and future generations and hopefully as a result pushed the environment to the top of their political agenda. However, although people gained more information on which to base their vote in June, the public were still a little worried about how much trust they had in each candidate to actually act on what had been discussed during the meeting. It was clear which candidates were more concerned about the environment and perhaps the most interesting point was no Labour representation at all at the public meeting.

(1) All PPCs were invited to sign up to five green pledges. The Green X Code targets are:

Waste: Provide every household with quality doorstop recycling ensuring no new incinerators are needed and half our waste is recycled by 2010.

Transport: Treble investment in buses and traffic calming by 2005 so that everyone has access to regular public transport and can live in a safe street.

Climate Change: Protect the world’s climate by cutting C02 emissions by 20% and generating 20% of electicity from renewable sources by 2010.

Business: Make business accountable to society by requiring directors to report on, and take into account their social and environmental impacts.
Climate Change GMO Politicians Waste